skip to main | skip to sidebar

Awesome film of the month: Wizard of Gore

This are late. Do you know why? Because no one reads them, so they have no reason to be on time. Additionally the release date of Wizard of Gore was pushed back a month, AND Lionsgate decided not to release Sundown: The Vampire In Retreat in the UK. 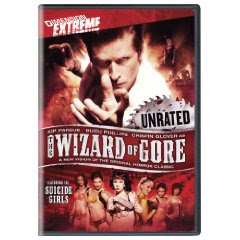 Wizard of Gore was actually pretty good (in an actually *good* way). Very showy, very creepy and hugely entertaining. For such a low budget film it looked really slick (director Jeremy Kasten's editing experience does wonders for the picture), and the performances were top dollar. Jeffrey Combs (Re-Animator, The Frighteners, FORTRESS) makes the most of five lines and puts in a very memorable and almost unrecognisable performance, while Kip Pardue (Rules of Attraction) makes a very credible leading man. I could really have done without all the Suicide Girls though...it cheapened the whole thing in a cringy "horror fans like boobs don't they?" sort of way. That said, I guess we kinda do like boobs (plus I am going to tag those hussies up). Yawn, it's up to you.

If you want more *really* good information head over to www.jeffreycombs.blogspot.com as she gets exclusives and everything else. She's great. She's a geek with a cause. I'm just lonely.